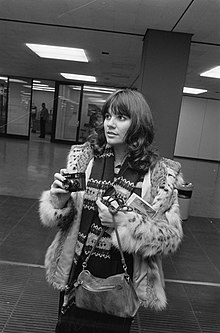 How exciting for this 9-year old to be able to share her gift with such a large crowd, one which couldn't be more appreciative or enthused. Amira is a bit nervous — she has never been before such a large audience… But then she sings the stars from the sky and gets a standing ovation. The jury (Gordon, Dan Karaty and Chantal Janzen) are stunned and give her one of their 'golden tickets,' which means that Amira goes directly to the live shows. Gordon is not the only one who is amazed to hear about how she was self-taught. She has had nothing to go by but the recorded works that she has listened to and sung with, over and over, till they became part of her. Gordon speaks of the purity and beauty of her voice and how the spirit of her singing reminds him of the great Maria Callas.
Translation (excerpt):GORDON: Amira they sometimes say that old souls live on in people and when I hear you sing then you have almost the inspiration of Maria Callas, who unfortunately is no longer , but your voice is so pure and so beautiful. But I think it's so special that for a girl your age that you do this, that's unbelievable. CHANTAL: How did you learn to sing? Do you have a voice teacher?AMIRA: No, I do not have singing lessons.CHANTAL: So, you learn yourself. You just listen and then you sing along and at some point you can do it .GORDON: Incredible!CHANTAL: And what is your dream?AMIRA: Later I would really like to be a singer, but if that fails, then I would like to participate in the Olympic Games in Athletics. Full translation and lyrics here. Video not playing? Try here.

Oct 16, 2011 It is the group's youth, says the dream team, which gives it the edge over Il Divo, the other pop-opera group invented by Simon Cowell in 2003, while their genuine vocal skills can grab the.