It is an open-source Java servlet container that implements many Java Enterprise Specs such as the Websites API, Java-Server Pages and last but not least, the Java Servlet. The complete name of Tomcat is 'Apache Tomcat' it was developed in an open, participatory environment and released in 1998 for the very first time. It began as the reference implementation for the very first Java-Server Pages and the Java Servlet API. However, it no longer works as the reference implementation for both of these technologies, but it is considered as the first choice among the users even after that. It is still one of the most widely used java-sever due to several capabilities such as good extensibility, proven core engine, and well-test and durable. Here we used the term 'servlet' many times, so what is java servlet; it is a kind of software that enables the webserver to handle the dynamic(java-based) content using the Http protocols.

So what exactly is Apache tomcat?

If you are a little familiar with the websites or have some basic knowledge about the websites, you must have heard about the HTTP protocol or may also know what actually are they. If you want to provide any web-services such as you want to provide a simple static content possibly by using HTML (or Hypertext Markup Language), or maybe you just want to send data from a server to point you, so you necessarily need a server and that server is HTTP(HyperText transfer protocol). So, as we all know that if anyone wants to make a simple, static website, he definitely requires an HTTP server, but if he wants to make website dynamic, he has to use servlet. We use the HTTP server if we want to send simple data. If we want to send dynamic data or to make our website dynamic, we need to use the servlet. Hence, we need an HTTP server and what else we need is a container where we will run or servlet, so when we combine the HTTP server and the servlet (or we can say servlet container), they both combine to become a single server know as tomcat server.

In simple words, we can say that The Apache Tomcat is actually a server and a servlet container.

What kind of server is Tomcat?

The Java ecosystem supports a wide variety of application servers, so let's have a little discussion on each of them and see where Tomcat fits in: 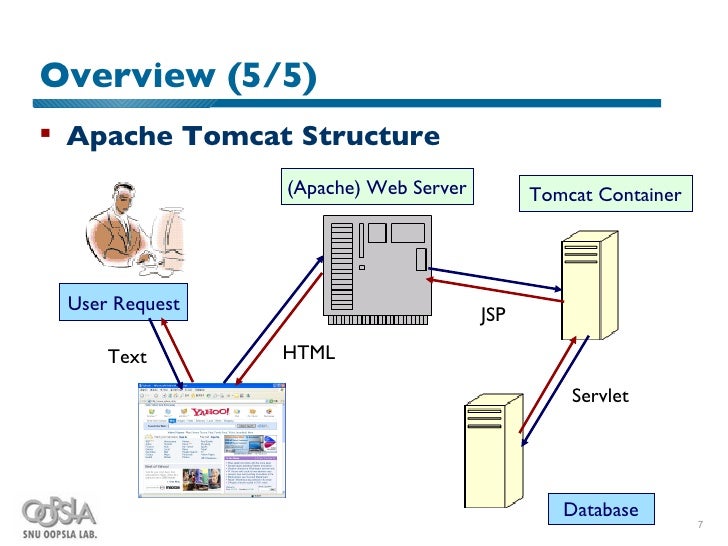 Tomcat receives a request, parses it into a Request object, and calls the Servlet. That Servlet generates all the output in a Response object, and Tomcat sends this back as a response. A typical example, with a Web application, using Tomcat and the Apache web server.

A servlet container is basically an implementation of the Java servlet specification, which is mainly used for the purpose of hosting Java servlets.

The Java enterprise application-server is an implementation of the Java specification.

A web- server is a kind of server designed to serve files using a local system such as Apache.

We can say that, at the center, the Tomcat is JSP (Java Server Pages) and Servlet. The JSP is one of the server-side programming technologies that enables the developers to create platform-independent dynamic content and also known as the server-side view rendering technology. A servlet is a java-based software component that helps in extending the capabilities of a server. However, it can also respond to several kinds of requests and generally implemented web server containers to host the web-applications on the webservers. As the developer's point of view, we just have to write the java server pages (or JSP) or the servlet and not required to worry about routing; the Tomcat will handle the routing.

The Tomcat also consists of the webserver known as the Coyote engine due to which it's possible to extend the capability of Tomcat to include several java enterprise specs, and including the Java Persistence API(JPA). The Tomcat also has an extended version known as the 'TomEE' that contains more enterprise features.

Let's see how to install Tomcat. But before doing that, we are required to download the Tomcat. If you are a window ten user, you can use the following given steps for downloading and installing the Tomcat on your system:

There are many versions of the Tomcat available with different features on its website. You can choose the version according to your requirements, but we suggest you download the latest stable version.

Step 1. Open the Google Chrome or any of your web browser and type 'download Tomcat for windows' in the search box. You can also go directly on Tomcat's website by clicking on this https://tomcat.apache.org/download-90.cgi#9.0.38

Step 2. Go to Download and click on the downloaded file and wait for little until the installation process starts.

Step 3. Once the installation process gets started, click on the 'Next' button, as shown below:

Step 4. Click on the button labeled as 'I Agree.'

Wait for some time until the Tomcat gets installed.

Some significant advantages of Tomcat are as follows:

Let discuss some disadvantages of Tomcat