The company puts a twist on Wagner in its first drive-through opera.

When Lyric Opera of Chicago went COVID-dark on March 13, 2020, the next show was supposed to be Götterdämmerung, the fourth of four installments in Richard Wagner’s Der Ring des Nibelungen, a.k.a. the Ring cycle. Lyric had doled out one opera per season for the past four, and after premiering Götterdämmerung, the company planned to loop back around to the beginning of the story and run all the productions in the space of a week, in three total cycles. Überfans travel around the globe for Ring cycles, like opera’s analog of Deadheads. Lyric estimated the cancellations cost it $15 million.

“Pivoting is an essential part of life,” says Anthony Freud, Lyric’s general director. But in opera, with each production often requiring five years of planning, companies pivot more like cruise ships than point guards. Which makes it all the more impressive to see Lyric return to in-person performance with Twilight: Gods, running April 28 and 30 and May 2. Or rather, in-vehicle performance. Twilight: Gods is a six-scene drive-through opera that Lyric developed jointly with Michigan Opera Theatre. Pods of eight or nine cars, windows rolled up, proceed from set to set in the subterranean Millennium Lakeside Parking Garage. People drive up to a scene, turn off their engines (but not the power), and listen to an FM transmission of the music performed outside their car.

The music and libretto distill 65 minutes from the five-hour Götterdämmerung (which translates to “twilight of the gods”), punctuated by original verse from local poet avery r. young, who serves as narrator and guide, a Virgil for the automotive audience. His contribution is for Chicago alone; a different poet filled this role at the show’s Detroit premiere in October. “It wasn’t about placing Valhalla on 63rd and Ashland,” young says. “It’s what I do with language and performance that is Chicago.” 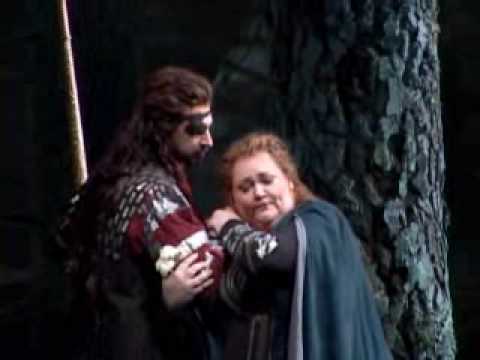 Already in collaboration with Lyric on a new commission tentatively scheduled for 2023, director Yuval Sharon took on a position with the company to create pandemic-proper art; he also assumed the artistic directorship of Michigan Opera Theatre last fall. He marshaled the suddenly idle resources of both companies to grow a show from the germ of social distancing. Twilight: Gods reached its stage, such as it is, in about six months. “Opera can benefit greatly from a sense of spontaneity that the machinery of opera doesn’t always allow for,” Sharon says.

The show brings atypical intimacy. The barrier of the windshield and the sound arriving through the stereo may seem alienating, but they’re outweighed by the small size of the pods of vehicles and the physical proximity to the singers. “Even though you are in your car, Christine Goerke is nevertheless 10 feet away from you,” says Sharon, referring to the superstar soprano who sang Brünnhilde in the Detroit production of Twilight: Gods, as she was supposed to for Lyric’s Ring.

A new Siegfried added to the excitement of Seattle Opera’s most ambitious summer program yet. 1980 RING By 1980, Seattle’s Ring was a well-known west coast cultural phenomenon. Seattle Opera's BRAVO! Is the premier Seattle-area arts organization for young people between the ages of 21 and 39.

Ring The Operation Couldn't Be Completed

Catherine Martin, a mezzo-soprano who plays Waltraute, a Valkyrie, in the opening scene, had also been rehearsing for the Ring at the time of the March shutdown. She found participating in Twilight: Gods in Detroit surprisingly emotional; they are the only offline performances she’s done between the shutdown and now. “I didn’t know if I’d get to wear it again,” Martin says of her rich scarlet Ring costume. She felt intensely connected to the audience. “The first few sets of cars, you could see people just kinesthetically feeling this release,” she says. “I saw people burst into tears.”

Although Twilight: Gods will be recorded and Freud doesn’t rule out remounting it someday, perhaps alongside a future Ring, the show feels very much a denizen of this odd liminal time in history. When else will a roughly half-million-square-foot floor of a parking garage be free? When else will human connection feel so novel? It appears out of the mist and is gone. Which, come to think of it, is the essence of live performance.

Das Rheingold
Scene i (at the bottom of the Rhine): The Nibelung, Alberich,steals the gold guarded by the Rhinemaidens, with the intentionof fashioning a ring which will give him limitless power.
Scene ii (an open space on a mountain height, near the Rhine):Wotan, leader of the Gods, has built his fortress, Valhalla, byoffering Freia, the goddess of love, as payment for the work ofthe giants, the brothers Fasolt and Fafner. Without Freia andher golden apples, the gods will age and die. With the help ofLoge, the god of fire, Wotan will go after the gold stolen byAlberich, to be provided as a ransom for Freia.
Scene iii (the subterranean caverns of Nibelheim): Wotan and Logesucceed in tricking Alberich and transport him along with thegold and ring to their mountain height.
Scene iv (as sc. ii): Fasolt and Fafner are satisfied with thegold in exchange for Freia, but not before Alberich curses thering. Erda, the earth goddess, appears and warns Wotan that possessionof the ring will have fateful consequences, even the end of thegods themselves. He gives up the ring to the giants, and thecurse is in evidence as Fafner immediately kills his brother. To the lament of the Rhinemaidens over the loss of their gold,the gods enter Valhalla.

Die Walküre
Act I (inside Hunding's dwelling): Siegmund arrives exhaustedin the dwelling of Hunding, where he meets Sieglinde, Hunding'swife. Prior to the action, Siegmund has run afoul of Hunding'sclan, and when this is discovered, Hunding informs him that, thoughhe may enjoy the shelter of his home tonight, tomorrow they mustfight to the death. Siegmund is without any weapon, but whenleft alone, he recalls that his father told him a sword wouldbe available to him in time of need. Sieglinde returns, havinggiven Hunding a sleeping potion. She recalls that at her wedding,a stranger appeared and plunged a sword into the tree that isin the middle of their dwelling (the leitmotiv of 'Valhalla'tells us that the stranger was Wotan). They soon realize theyare twins of the Volsung clan, separated in early childhood, andSiegmund embraces her, not only as sister but as wife, and, havingextracted the sword from the tree, they both escape from the dwelling.
Act II (a wild rocky mountain ridge): Wotan is confronted by hiswife, Fricka, the goddess of love, over the offense of a brothertaking his sister as wife. We learn the twins are Wotan's childrenby a mortal woman, part of his plan to create a hero free of hisinfluence who can regain the ring. But, as Fricka points out,Siegmund is not truly free, and further, for his offense he mustdie. Wotan agrees, and orders his favorite daughter (by Erda),the valkyrie Brünnhilde, to carry out this task. Siegmundeventually arrives with the exhausted Sieglinde, but at the lastmoment Brünnhilde decides to defend him against Hunding. Wotan appears, shatters Siegmund's sword, despatches Hunding,and goes after Brünnhilde for disobeying him.
Act III (on the summit of a rocky mountain): Brünnhilde leavesSieglinde with her sister valkyries, after informing her thatshe is pregnant with the greatest of heros (to be Siegfried). Facing Wotan alone, she defends herself, explaining she was onlyfollowing Wotan's heart. His punishment is that she will nowbe like any mortal woman, but he will protect her with a circleof magic fire that can be passed by only the mightiest of heros. With that he puts her into a magic sleep to await that moment.

Siegfried
Act I (a cave in the rocks in the forest): Siegfried is now astrapping young man, having been brought up by Mime, Alberich'sbrother, who is well aware that this hero may one day regain thering, and he wants to be there when he does. As Siegfried leaves,Wotan enters (now disguised as the Wanderer), and through a gameof riddles, informs Mime that Siegmund's shattered sword (neededfor the task of regaining the ring) can only be forged by onewho knows no fear. When Siegfried returns, that is exactly whathe does.
Act II (deep in the forest): Fafner has since turned himself intoa dragon, the better to guard the gold and the ring, and the caveis kept watch over by Alberich. Siegfried and Mime arrive, and,with the refashioned sword, Siegfried kills the dragon and takesthe ring and the Tarnhelm (a helmet that enables the wearer toassume any disguise). In the process he gets some of the dragon'sblood on his hand, which allows him, not only to understand theforest animals, but to understand Mime's secret thoughts. Oncehe learns that it was always Mime's intention to kill him, Siegfrieddespatches Mime with his sword. A forest bird leads Siegfriedonward to Brünnhilde on the top of the mountain.
Act III (sc. i, the foot of a rocky mountain): During a scenewith Erda, we learn that Wotan no longer fears the end of thegods, but desires it, and will leave his inheritance to the Volsungs. When Siegfried arrives, the Wanderer tries to block his way tothe mountain, and Siegfried shatters Wotan's spear, the sourceof his authority by virtue of the contracts engraved on it. Withthis act, Wotan's authority is also shattered. (sc. ii, on thepeak of Brünnhilde's rock): Siegfried cuts through the magicfire, awakens Brünnhilde, and the two sing an ecstatic loveduet.

Götterdämmerung
Prologue (as at the end of Siegfried): The Norns predict the future,followed by Brünnhilde sending Siegfried off for deeds ofglory, but not before he has given her the ring as a pledge.
Act I (sc. i, the hall of the Gibichungs): Hagen (whose fatheris Alberich) advises his half-brother Günther that his sister,Gutrune should marry. Toward this end he maliciously suggestsSiegfried, and Gutrune prepares a love potion for this purpose. Under the influence of the potion, Siegfried also offers to bringback Brünnhilde to marry Günther. (sc. ii, Brünnhilde'srock): Waltraute, one of her sister valkyries, arrives to tellher that Wotan has cut down the World Ash Tree, piled up the logs,and is now waiting with the other gods to die. As she leaves,Siegfried arrives, disguised by the Tarnhelm to appear as Günther. He also takes back the ring.
Act II (on the shore in front of the Gibichung hall): Alberichappears to Hagen to urge him to acquire the ring. Meanwhile allhave assembled for the double wedding, and Brünnhilde, realizingshe has been betrayed, wants vengeance. She tells Hagen thatshe gave Siegfried protection everywhere but his back (becausehe would never turn to run away in battle), and that is wherehe should strike.
Act III (sc. i, wild woodland and rocky valley by the bank ofthe Rhine): The Rhinemaidens advise Siegfried to return the ring,but he refuses. He meets up with Hagen, who gives him a potionthat enables him to remember all that Gutrune's potion made himforget. With his mind clear, and an understanding of what hehas done to Brünnhilde, Hagen stabs him in the back. (sc.ii, the hall of the Gibichungs): Everything is sorted out, butas Hagen goes to retrieve the ring, Günther stands in hisway and is murdered by him. As he is about to grab the ring,Siegfried's dead hand suddenly raises up, to the horror of everyone. Brünnhilde then realizes what she must do: a funeral pyreis prepared, she lights it and jumps into it on her horse. Asa result, the Rhine overflows, the Rhinemaidens receive the ringback, Hagen drowns trying to retrieve it, and Valhalla is setaflame, bringing about the end of the gods. 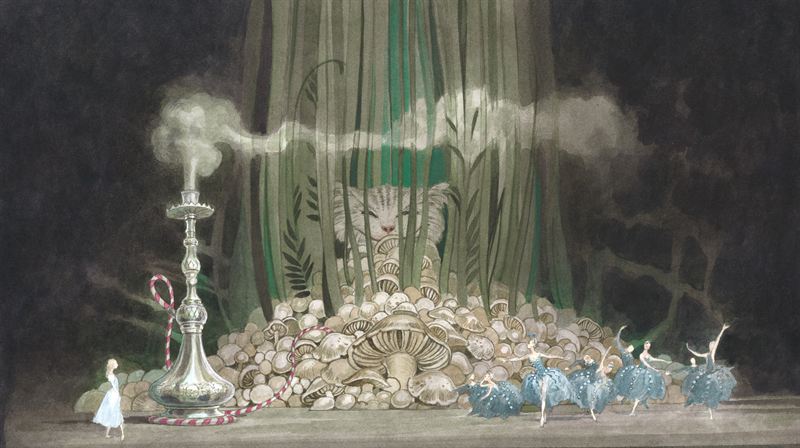 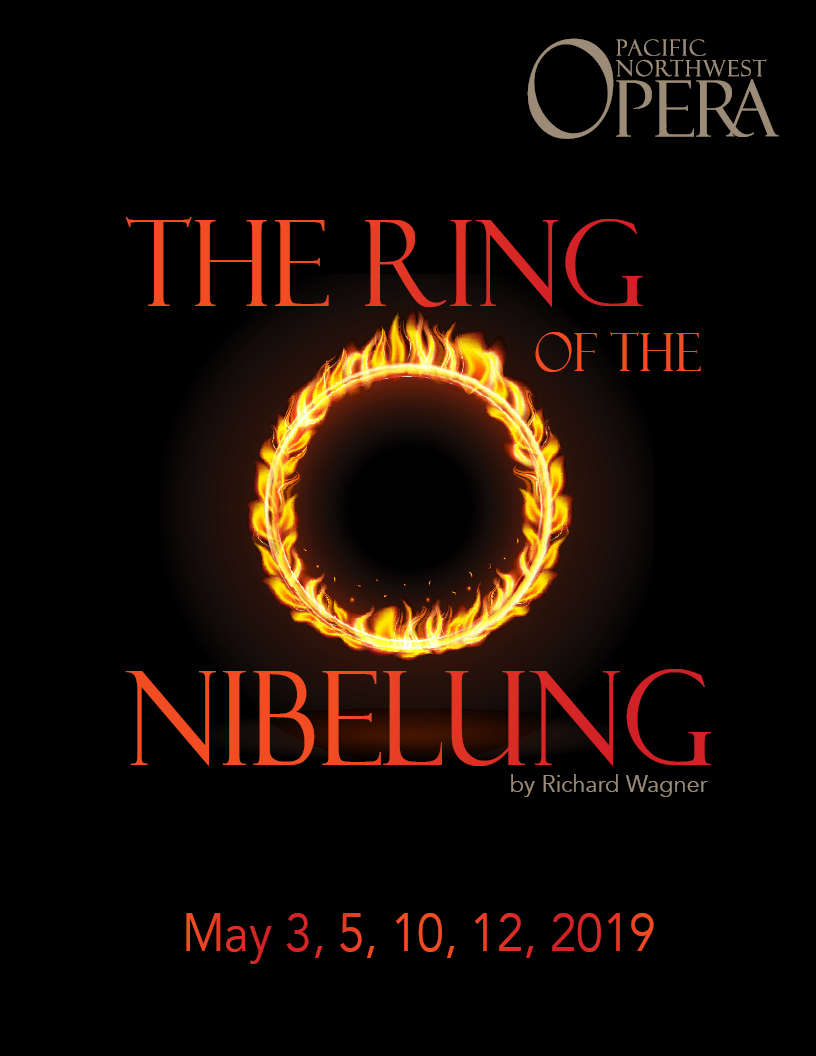