The Prince is given a magic flute and Papageno a set of magic chimes as protection; the instruments have a way of charming both man and beast. Additionally, three spirits, acting as guardians and advisors, will lead the way.

The mysterious, bewitching and inexhaustible Magic Flute ! Composed feverishly a few weeks before his death, this lyrical testament by Wolfgang Amadeus Mozart is the universal opera par excellence, a source of joy and perpetual wonder, a tender and profound companion that will be with us for life.The Magic Flute is intended for people of all ages, with its marvellous music, one of the most poetic and luminous works ever written by Mozart.The book by Emanuel Schikaneder lends itself to all sorts of interpretations:Is it a children’s story?An esoteric and initiatory tale, loaded with Freemasonry symbols?Or, more simply, a popular allegorical fable, a shining marriage of noble ideas and childish wanderings, enlightened, ordered and balanced by Mozart’s divine hand?Every listener can hear it reveal its keys…

Prince Tamino is sent by the Queen of the Night to free his daughter Pamina from the prisons of the magician Sarastro, described as a tyrant.Guided by the Queen’s three ladies, Tamino is accompanied by Papageno, a colourful bird catcher, whose cowardice contrasts with Tamino’s nobility and courage. Papageno is given a set of bells and Tamino a magic flute – two instruments that will help them in their journey.But during their trip Tamino discovers that the forces of evil are not on Sarastro’s side but on the side of the Queen of the Night:she has deceived him and will stop at nothing to take revenge on Sarastro, whom she despises.Filled with trials, Tamino’s path to free and win over Pamina is loaded with symbols which, from one scene to the next, lead them towards love and light, under Sarastro’s benevolent wisdom.The Queen of the Night and her retinue end up destroyed.

Prince Tamino nearly dies after being bitten by a snake:The bird catcher Papageno, a timorous smooth talker, presents himself as his saviour, but it is in fact the three ladies of the Queen of the Night who have saved Tamino.They give the young prince a portrait of Pamina, daughter of the King of the Night, held prisoner by the magician Sarastro, whom they describe as a tyrant.Tamino burns with desire for the portrait and swears that he will go and free Pamina.

Accompanied by a magic flute and most of all by the talkative Papageno, Tamino leaves in search of Pamina.Their adventure is coupled with a true spiritual initiation:but is Sarastro really the monster described by the Queen of the Night.Who knows?

Before the three gates of Wisdom, Reason and Nature, Tamino learns that the magician has taken Pamina away for her own good, in order to snatch her away from the harmful influence of her mother the Queen.The Queen, filled with hatred, is willing to do anything to get revenge, and when she appears before her daughter, it is to encourage her to kill Sarastro – in an aria with vocalisations as sharp as daggers.

Pamina is unaware of what awaits her.Sarastro cites the principles of peace that reign over the place, and Tamino, who is made to undergo a trial of silence, remains desperately quiet.She thinks of killing herself. 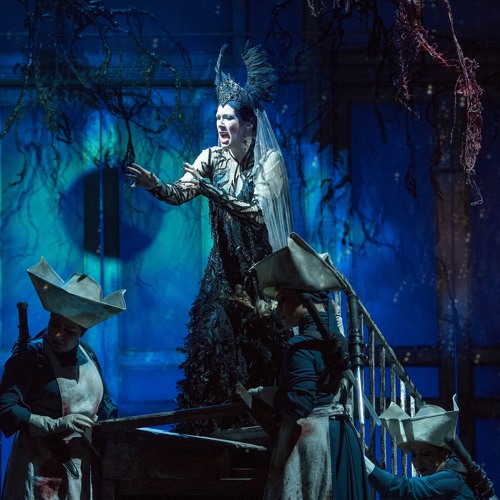 The cowardly Papageno, a big-hearted boaster, has no grand dreams: just a little woman to be his companion – a Papagena. Trials await him as well, but less demanding ones than those imposed on Tamino and Pamina.

Despite the traps laid by the Queen of the Night, her three servants and the slave Monostatos, Pamina and Tamino manage to pass the trials of water and fire, guided in their initiation by the “omnipotence of music.”Papageno has finally found his Papagena.The evil forces having been swallowed up by the dark, Sarastro celebrates the young couple’s happiness:“the rays of the sun push back the night. »

The plot of The Magic Flute is undeniably complicated. And it’s not the complexity of human relationships that swirl around a basic dramatic premise like “love” (as in The Marriage of Figaro) or morality and politics (as in Don Giovanni). Neither is it a comedy, though there are comic moments. It is truly a head-scratcher from almost any viewpoint. One of the only criticisms Richard Wagner had of Mozart was that he was willing to set low quality libretti to high quality music (and if that was the worst thing Wagner could say about Mozart, then it was high praise). But if Wagner was thinking about The Magic Flute, then he had a point. Unraveling the plot of The Magic Flute appears to have generated more scholarly research than the music has, as scholars and fans alike try to account for its eccentricities. The opera conductor and part-time Mozart scholar Myer Fredman once remarked on how oddly the plot of The Magic Flute unfolds. “An overture, then a dragon,” he notes, “three ‘cabaret’ ladies, a quasi-folk song, an intensely passionate invocation to a portrait, and a virtuoso tirade. Now follows a padlock, a magic flute, a magic glockenspiel and five singers who step out of character to talk directly to the audience.” And the heroine hasn’t even made her entrance yet! It’s no wonder audiences are confused. Added to this, there is the element of pantomime, the blend of comic and serious, and rapid scene changes (though one can find that in Shakespeare as well). The staging of The Magic Flute is notoriously difficult without making it look either farcical (overlooking the serious elements) or Wagnerian (overlooking the humor and wit).

Is The Magic Flute a fairy story, then, a jumble of loosely-Masonic allegories that changed direction half way through, or is it a tightly constructed plot whose twists and ambiguities all serve a unified, higher purpose? A partial answer emerges in the backstory of Schikaneder’s troupe, which had been performing “fairy-tale operas” for several years before The Magic Flute. In 1789, they staged a performance of Karl Ludwig Giesecke’s Oberon, a Singspiel that inspired many of the characters and plot turns in The Magic Flute. (Oberon was itself an adaptation of an earlier fairy-tale Singpsiel, Sophie Seyler’s Hüon und Amande, which was itself an adaptation of an earlier work by Christoph Wieland.) Giesecke was a member of Schikaneder’s troupe, a fellow Mason, and later played the (mostly speaking) role of the “First Slave” in the premier of The Magic Flute.

Jakob Liebeskind’s fairy story “Lulu, or the Magic Flute” also provided inspiration, and was published in a collection titled Dschinnistan just before Oberon was produced on the stage.

One of the engraved illustrations from Liebeskind’s Dschinnistan, showing a Sarastro-like high priest, Egyptian statuary, symbols of magic and the occult, and a princely figure.

In 1790, Benedikt Schack, another member of Schikaneder’s troupe, pulled together a number of composers (including Mozart) to contribute music for another Singspiel titled Der Stein der Weisen or Die Zauberinsel (“The Philosopher’s Stone”), also based on Liebeskind’s fairy tales. And just a few months before The Magic Flute was staged, a rival troupe in Vienna staged a performance of Joachim Perinet’s Kaspar the Bassoonist, or Die Zauberzither, which shares some similar plot lines with The Magic Flute and was similarly based on Liebeskind’s stories.

The genre of the Zauberoper, “magic opera” or “fairty-tale opera” was, then, at the height of its popularity, and Schikaneder begged Mozart to help him cash in on the current fashion. To an extent, then, the plot line of The Magic Flute was already set by these earlier precedents. At the very least, the two friends created a kind of opera in which complicated plot twists, bizarre narrative developments and ambiguous conundrums either didn’t matter to the audience, or could be explained away by the fancifulness and imagination of the Zauberoper genre itself.

The answer to the question of what The Magic Flute is all about depends largely on which authority one consults. Several Mozart scholars have claimed that the direction of the plot changes inexplicably a third of the way through. Did Mozart and Schikaneder decide after composing a substantial portion of the score to switch things around? It’s an interesting dilemma, because the Queen at the opera’s start does seem to be “good,” and Saratstro “bad.” (In Liebeskind’s fairy tales on which The Magic Flute appears to be based, the Queen is indeed a virtuous figure and the priest is evil.) The Queen’s helpers—the Three Ladies—save Tamino from the serpent (a symbol, perhaps, of Lucifer and deception) and they overtly praise the need for honesty. The Queen is telling the truth when she points out that Sarastro has taken her daughter from her. She gives Tamino a magic Flute and Papageno a magic glockenspiel that ultimately will bring them wisdom and happiness. She provides for them the Three Genii (or Three Boys) who are supernaturally wise and honest. On one level, at least, it would seem that the Queen really did start out as a good character, and was changed in the middle of Act I to an evil character, without recomposing the music or recasting the first part of the story.

But other scholars claim that these plot peculiarities can be understood in terms of a larger universal story that untangles the complexities of façade and inner truth. In this interpretation, The Magic Flute is a sophisticated symbolic vehicle, a lesson in epistemology that represents a philosophical exercise commonly known in German as Sein und Schein (Reality and Appearance). It invites the viewer to look past first appearances, and examine the premises and assumptions on which those appearances are based. In other words, it takes the story much further than a mere fairy tale—where characters are “types” and the distinction between good and evil usually well-marked—and turns it into a more meaningful and profound allegory. Just as Tamino is forced to reconsider some of the allegations, innuendo, circumstantial evidence, rumor and other manifestations of apparent truth, the audience also takes part in this exercise, discovering the true Sein (Reality) beneath the deceptive Schein (or Appearance). This makes the first part of the opera an intentional deception, trying to convince Tamino that good is evil, and evil good. The second Act then pulls the curtain back and reveals the Truth that the Queen had hidden in the opera’s opening.

But the key to understanding what’s really being presented on stage is in Mozart’s music itself.

Rossini’s The Barber of Seville Gilbert & Sullivan’s The Pirates of Penzance