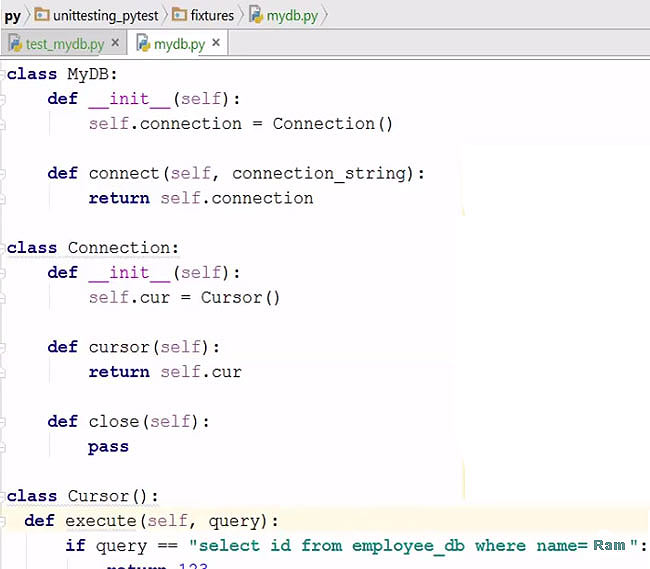 If you have trouble understanding mocks for testing in Python like me, then this post is for you.

Pytest is a testing framework based on python. It is mainly used to write API test cases. This tutorial helps you understand −. Installation of pytest. Various concepts and features of pytest. Sample programs. By the end of this tutorial, you should be able to start writing test cases using pytest. Pytest supports execution of unittest test cases. The real advantage of pytest comes by writing pytest test cases. Pytest test cases are a series of functions in a Python file starting with the name test. Pytest has some other great features: Support for the built-in assert statement instead of using special self.assert. methods.

Both can be installed via pip.

The code in this post can be found in

Here’s an example. Imagine that you have a function called compute(). Part of its code contains an expensive_api_call() that takes 1,000 seconds to run

I would expect that compute(1) returns 124, so I would write a test in Python:

Because of the API call, this test also takes 1,000 seconds to run. This is too slow for a simple test.

When I write this test, I don’t really care whether the API call runs or not. What I want to know when I develop is that my code works as expected when API returns correct data.

If I can provide fake data without calling the API, then I don’t have to sit there are wait for the test to complete. This is where mocks come in.

Test an interface if possible

In other words, it is a trick to shorten development feedback loop.

Let’s review again: I have two options of writing a test for compute().

Option 2 is better because the developer can choose run only the fast tests when she is developing. She can now run the integration tests elsewhere, for example, on a CI/CD server as part of the build process, that does not interfere with her flow.

So how do I replace the expensive API call in Python?

In Python, the solution is a library called mock:

The definition of mock in Merriam-Webster 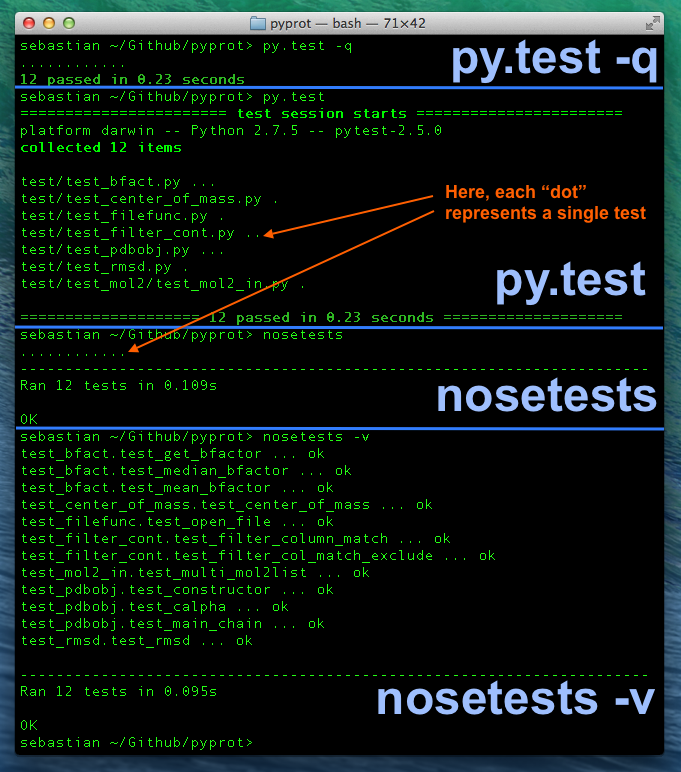 In Python, you use mocks to replace objects for testing purposes. In the next section, I am going to show you how to mock in pytest.

The most important object in mock is the MagicMock object. Playing with it and understanding it will allow you to do whatever you want.

The basic idea is that MagicMock a placeholder object with placeholder attributes that can be passed into any function.

Let’s go through each one of them.

Recipes for using mocks in pytest

We will use pytest-mock to create the mock objects.

The mocker fixture is the interface in pytest-mock that gives us MagicMock.

Before diving in: what confused me

Before I go into the recipes, I want to tell you about the thing that confused me the most about Python mocks: where do I apply the mocks? 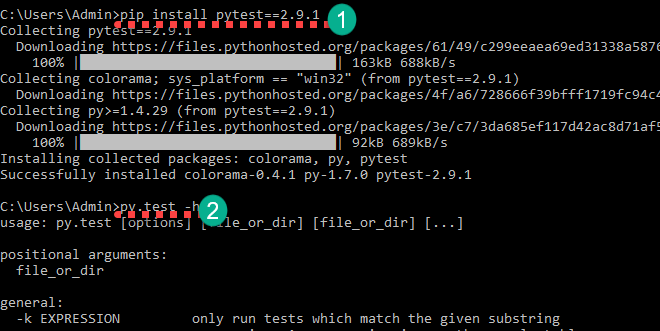 For more details, see the offical docs on this topic.

I will also demonstrate this point in the recipes.

The code used in this post can be found in

The function double() reads a constant from another file and doubles it.

Because CONSTANT_A=1, each call to double() is expected to return 2.

To replace CONSTANT_A in tests, I can use patch.object() and replace the CONSTANT_A object with another constant.

In main.py, I have a slow function

where it is slow because in slow.py,

So each test will take at least 3 seconds to run.

When I mock a function, what I really care about is its return value, so I can patch the function with

This removes the dependency of the test on an external API or database call and makes the test instantaneous.

For classes, there are many more things that you can do. Remembering that MagicMock can imitate anything with its attributes is a good place to reason about it.

I will only show a simple example here. For more complex ones, I recommend reading the references in the next section.

I have a class Dataset that has a slow method,

It is called as part of the main() function

For the test example, I am using patch.object to replace the method with a tiny function that returns the data that I want to use for testing:

Useful reference for mocking a class

There are many scenarios about mocking classes and here are some good references that I found:

Should I replace every API call with mocks?

No. I would combine integration tests and unit tests but not replace.

For developers, unit tests boost productivity. But for product development, integration tests are absolutely necessary. I still want to know when APIs external to the project start sending data that breaks my code. The testing can happen outside of developer’s machine, however.

When should I mock?

In my opinion, the best time to mock is when you find yourself refactoring code or debugging part of code that runs slow but has zero test.

Trying to make changes without a test means you are incurring technical debt for the future and making teammates pay for it. In this case, if my goal is making changes to the computations, I would figure out how to mock the data connectors and start writing tests.

The tests seem to be tied to how I implement the code. Isn’t that a bad thing?

Mocks are always white-box tests. You can’t use them without peeking into the code, so they are most useful for developers and not so much for testing specifications. It is a tradeoff that the developer has to accept.

Can you replace the return value in the same test twice??

Answer: yes. I don’t know how to do this with the Python base library mock but it can be done with pytest-mock:

The most common mistake that I make when I write tests with mocks is… that I mock after I make the method call I want to patch:

More than once I spent more than 15 minutes trying to figure out what was wrong 🤦‍♂️. If you are having trouble getting mocks to work,

You can easily instruct pytest to discover tests from every Python file:

However, many projects will have a setup.py which they don’t want to beimported. Moreover, there may files only importable by a specific pythonversion. For such cases you can dynamically define files to be ignored bylisting them in a conftest.py file:

and then if you have a module file like this:

If you run with a Python 2 interpreter then you will find the one test and willleave out the setup.py file:

If you run with a Python 3 interpreter both the one test and the setup.pyfile will be left out:

It’s also possible to ignore files based on Unix shell-style wildcards by addingpatterns to collect_ignore_glob.

The following example conftest.py ignores the file setup.py and inaddition all files that end with *_py2.py when executed with a Python 3interpreter: 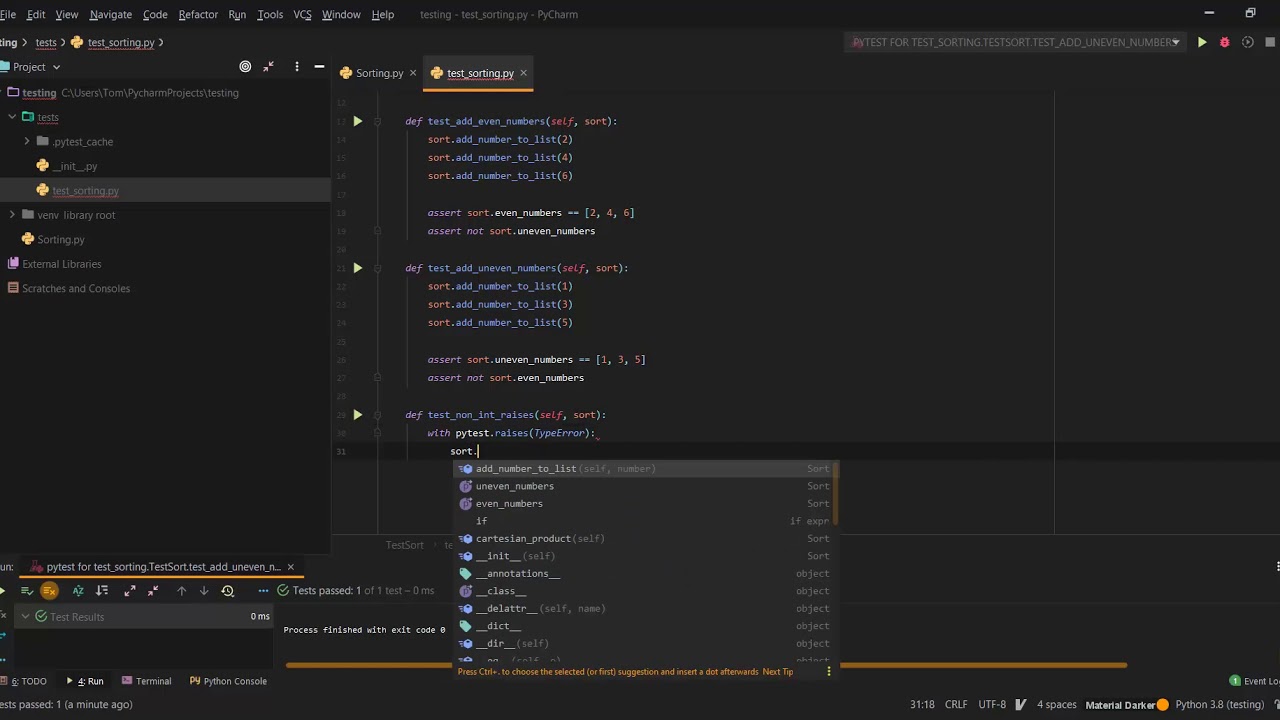 Since Pytest 2.6, users can prevent pytest from discovering classes that startwith Test by setting a boolean __test__ attribute to False.