Over the past years, Numba and Cython have gained a lot of attention in the data science community. They both provide a way to speed up CPU intensive tasks, but in different ways. This article describes architectural differences between them.

Numba is a just-in-time (JIT) compiler that translates Python code to native machine instructions both for CPU and GPU. The code can be compiled at import time, runtime, or ahead of time.

It's extremely easy to start using Numba, by simply putting a jit decorator:

As you may know, In Python, all code blocks are compiled down to bytecode:

To optimize Python code, Numba takes a bytecode from a provided function and runs a set of analyzers on it. Python bytecode contains a sequence of small and simple instructions, so it's possible to reconstruct function's logic from a bytecode without using source code from Python implementation. The process of conversion involves many stages, but as a result, Numba translates Python bytecode to LLVM intermediate representation (IR).

Note that LLVM IR is a low-level programming language, which is similar to assembler syntax and has nothing to do with Python.

The are two modes in Numba: nopython and object. The former doesn't use Python runtime and produces native code without Python dependencies. The native code is statically typed and runs very fast. Whereas the object mode uses Python objects and Python C API, which often does not give significant speed improvements. In both cases, Python code is compiled using LLVM.

LLVM is a compiler, that takes a special intermediate representation (IR) of the code and compiles it down to native (machine) code. The process of compiling involves a lot of additional passes in which the compiler optimizes IR. LLVM toolchain is very good at optimizing IR, so not only it compiles code for Numba, but also optimizes it.

Instead of analyzing bytecode and generating IR, Cython uses a superset of Python syntax which later translates to C code. When working with Cython, you basically writing C code with high-level Python syntax.

In Cython, you usually don't have to worry about Python wrappers and low-level API calls, because all interactions are automatically expanded to a proper C code.

Unlike Numba, all Cython code should be separated from regular Python code in special files. Cython parses and translates such files to C code and then compiles it using provided C compiler (e.g. gcc). 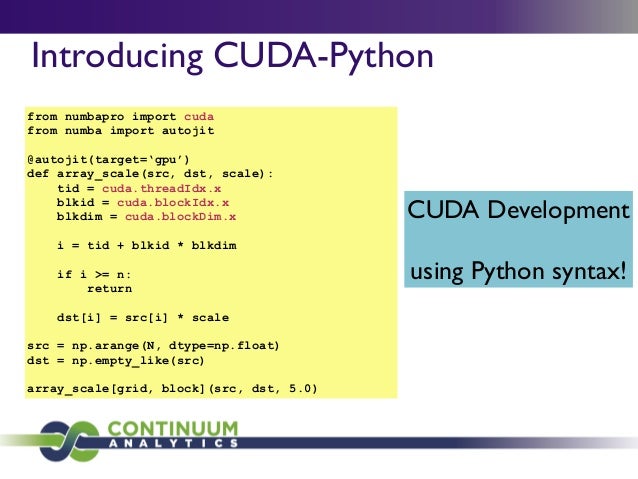 Writing fast Cython code requires an understanding of C and Python internals. If you know C, your Cython code can run as fast as C code.

Personally, I prefer Numba for small projects and ETL experiments. You can always plug it into existing projects. If I need to start a big project or write a wrapper for a C library, I will go with Cython, because it gives you more control and easier to debug.

Also, Cython is the standard for many libraries such as pandas, scikit-learn, scipy, Spacy, gensim, and lxml.

Want a monthly digest of these blog posts?