The MySQLCursor of mysql-connector-python (and similar libraries) is used to execute statements to communicate with the MySQL database.

Using the methods of it you can execute SQL statements, fetch data from the result sets, call procedures.

You can create Cursor object using the cursor() method of the Connection object/class.

Following are the various methods provided by the Cursor class/object.

Following are the properties of the Cursor class −

To connect to the database we use the connect() function of the mysql.connector module. It accepts connection credentials and returns an object of type MySQLConnection or CMySQLConnection (if C extension is installed).

The following table lists some common arguments of the connect() function.

Note: For complete list of arguments consult the official documentation.

The code in the following listing connects to the world database and prints the connection id.

Since I am on a Linux distribution where C extension is installed, the connect() function returns an object of type CMySQLConnection instead of MySQLConnection.

On a system where the C extension is not installed the output will look like this: 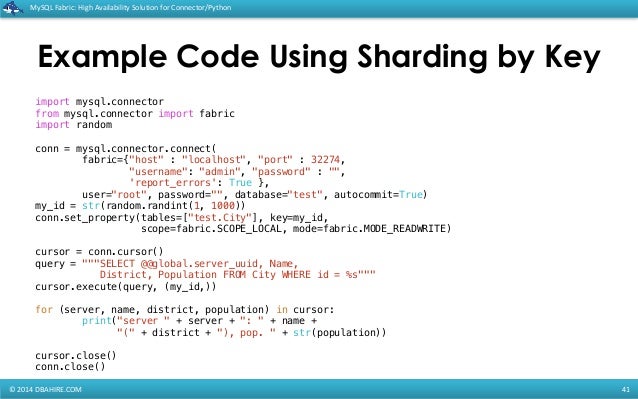 Instead of passing connection credentials as keyword arguments, you also pass them in a dictionary.

The connection to the database is automatically closed when the program ends. However, it is always good idea to close the connection explicitly when you are finished working with it.

To close the connection, we use the close() method of the MySQLConnection object.

We now know how to connect to the database. Let's see how we can handle errors.

Hardcoding connection credentials into the application is fine for testing purposes but it is not very feasible for the production environment for two good reasons. The following two arguments control settings about the configuration files:

Create a new file named my.conf with the connection credentials as follows:

The code in the following listing reads connection details from my.conf file.

Notice that in my.conf file we have specified the connection details under the section connector_python', which is one of the two sections from where MySQL Connector/Python will read options by default. If you want to change section name use the option_groups argument, as follows:

We can also split the connection details into multiple files. This can come in handy when you want to share some configuration across connections.

To read options from multiple configuration files change the value of option_files to a list.

Please enable JavaScript to view the comments powered by Disqus.