Greetings and welcome to this tutorial on how to draw a jellyfish (or nine).

How to Draw a Jellyfish: Happy Jellyfish!

For our first character, we are going to draw a happy little jellyfish.

Let’s add a bit of color now! For this guy I’ve just used red, light blue and purple for the shadows. Color in his tentacles and tongue with red. For his head, leave the eyes and reflections white and then just color the rest in blue. Finally use a light shading of purple for the inner area of his head and to give his tentacles a bit more form.

Alrighty, that’s one down. Let’s now do the other eight jellyfish! Next up I will teach you how to draw a jellyfish with a serious penchant for piratey shenanigans… They call him… the Jelly Pirate!

How to Draw a Jellyfish Easy

If you’d like to add some color to the Jelly Pirate, you’ll need some green, pink, brown and purple. Color in his tentacles green, his peg leg brown and his head pink (leaving the reflection and his eye white). For all the subtle shadows, you can add these in with a light shading of purple on his tentacles and the inner part of his head.

Okay let’s kick on to the next jellyfish! We are now going to learn how to draw a jellyfish who has taken a wrong turn and has ended up on the beach. I call him… The Beached Jellyfish! See you in Part 3! 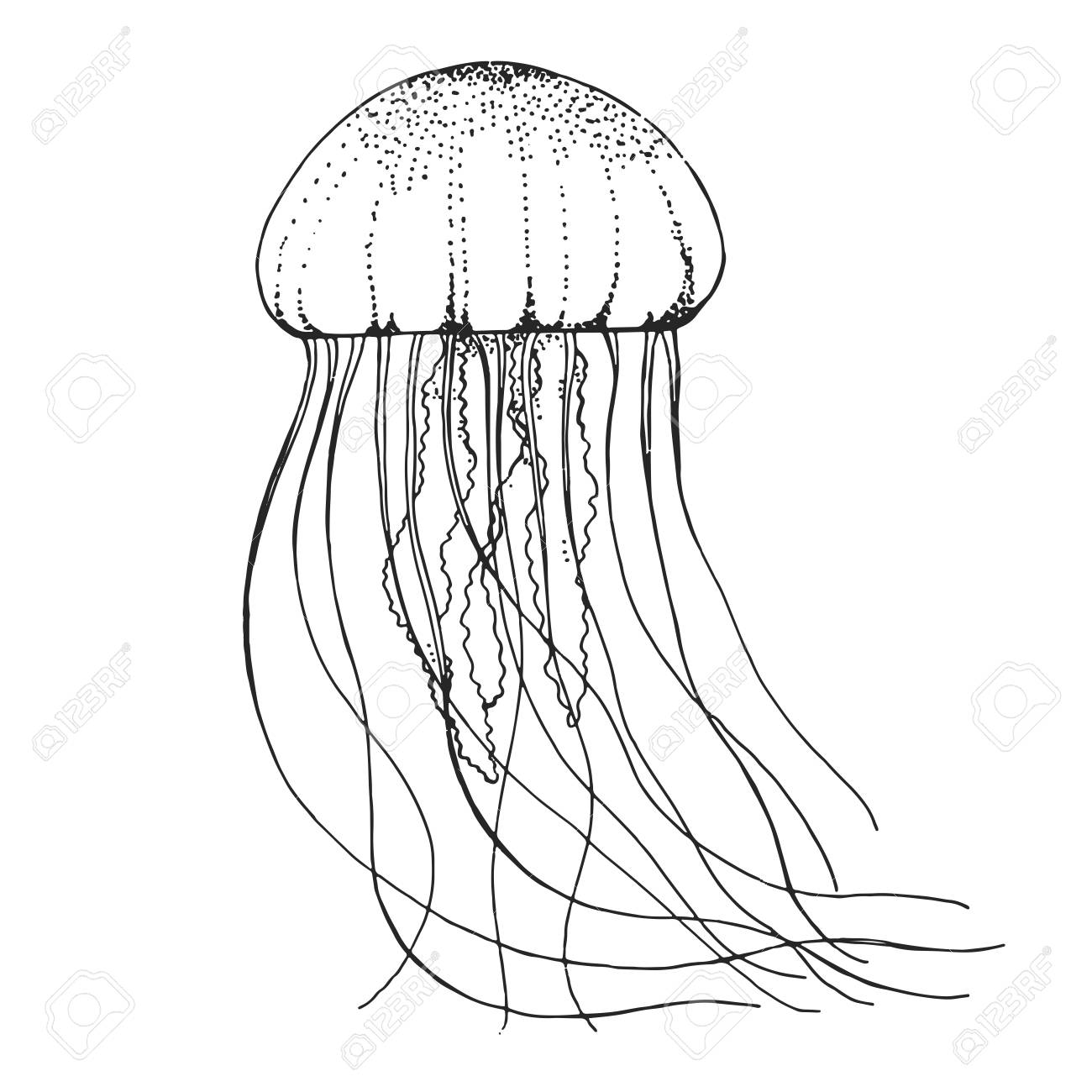 How to Draw a Jellyfish Step By Step

Let’s now draw a jellyfish who’s stuck on the beach. Poor dude is a bit dehydrated, been in the sun too long, and ain’t feeling the best. But that’s okay, the tide will be coming in shortly.

This jellyfish has a very simple color palette: light blue, magenta and purple (magenta is a bit of a less popular color, so if you don’t have magenta, feel free to replace it with a pink, a purple… heck, even a green!) Color in his pupils and the thin wavy strip at the bottom of his head with magenta. For the inner part of his head, lightly shade this area with the purple. If you’re feeling adventurous, also shade in the bottom areas of his eyeballs with the purple. This will make the eyeballs look a little three dimensional!

Alrighty, we have completed the beached jellyfish! We are now going to learn how to draw a jellyfish who has taken things a little too literally. He is part jelly (or jello) and part fish. Whatta weirdo! Let’s kick it!

How to Draw a Jellyfish Part 4: The Jello-Jellyfish!

It is a well known fact that the greatest jello flavour is RED! So if you have a similar taste in flavors, you can give him a nice vivid shade of red. If you look at a color wheel, the opposite color of red is green, so I made his fins and tail green to add maximum impact to the red. If you’d like to add some extra shadows, get out your purple pencil and lightly shade in different areas on his tail, head and eyes. 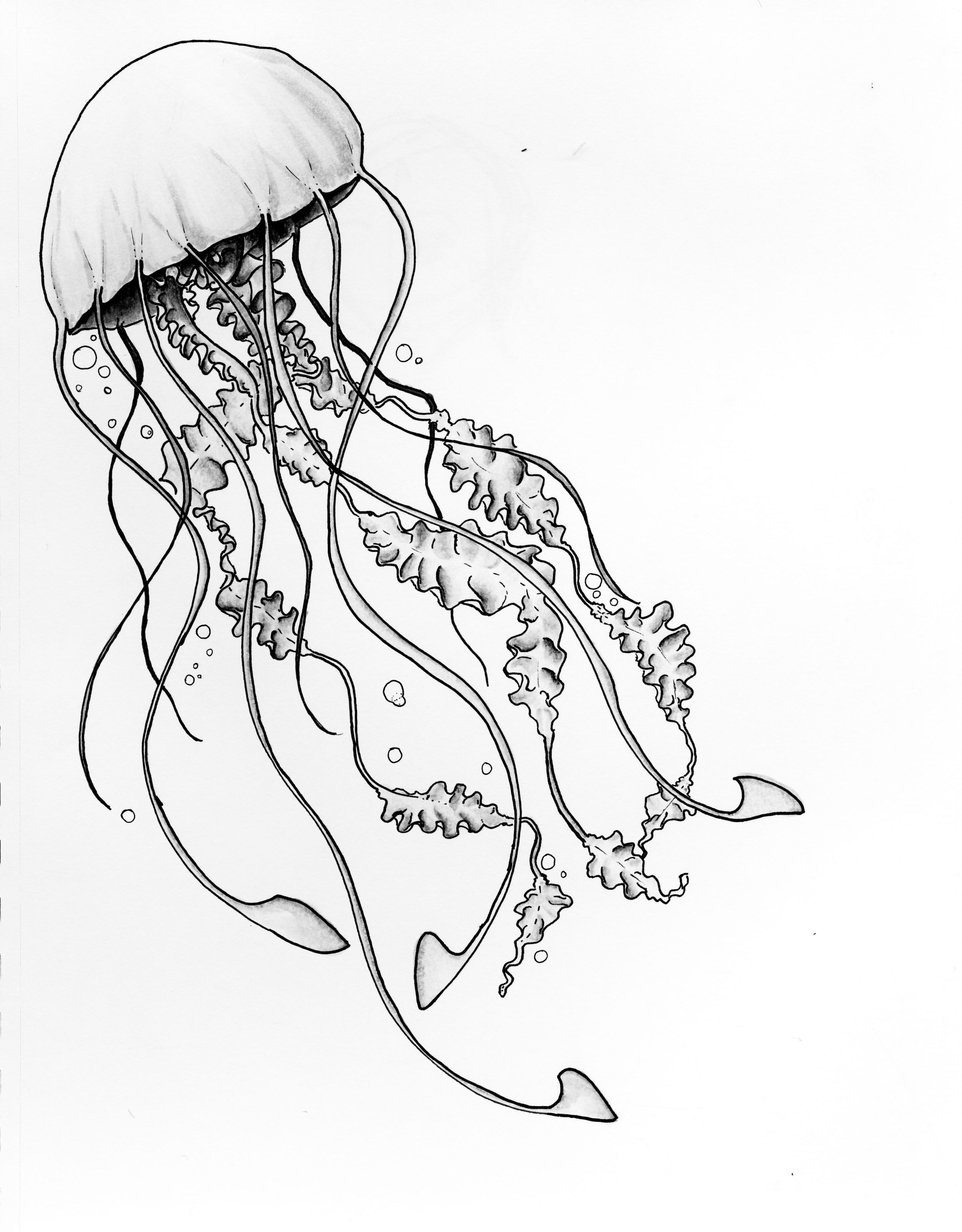 Okay we have completed the Jello-Fish. Let’s now move on to the next section where we will learn how to draw a jellyfish with anger issues!

How to Draw a Jellyfish Part 5: Angry Jellyfish!

The color of anger is definitely red, so let’s color in his head with a nice rich red (leaving his eyes and reflection white). Similar to our previous character, let’s use green for his tentacles (the complementary color to red). Finally for the shadows, just lightly color in a transparent layer of purple for the middle of his head, eyes and tentacles.

That’s our angry jellyfish completed! Next up we will learn how to draw a jellyfish who is a little bit gray and old. His name is… JellyPops!

How to Draw a Jellyfish Part 6: JellyPops!

JellyPops is pretty gray and old, so we let’s color his head and tentacles gray (with a dark gray for the middle of his head). To offset all this gray, let’s color in his hat with a vibrant red and green combo! Finally, color his cane brown and his glasses blue. Don’t forget to leave the reflections on his glasses and his head white.

Okay, we have completed our old and rickety JellyPops. Next up we will learn how to draw a jellyfish who has had a big fright… the Startled Jellyfish!

How to Draw a Jellyfish Part 7: Startled Jellyfish!

1. Start by drawing a beam shape for his head

2. Let’s begin putting in his tentacles. Start from the outside of his head and draw the outer tentacles converging together at the bottom. (You should see a triangle in the negative space between his tentacles)

3. Repeat the step above for the inner tentacles. (These super straight tentacles will hopefully make your jellyfish look extra startled!)

4. Draw two oval shapes connected together for his eyes. Then draw two little blobs over on the right hand side for some little reflections! 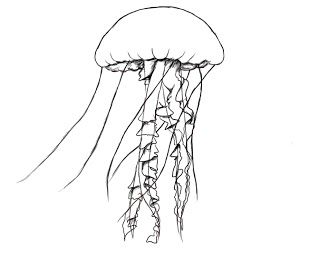 5. Let’s keep adding to that startled look! Draw in some pinpoint pupils and some sharp, straight lines popping out of his head. (I’m not sure why this evokes fright, but it does!)

6 Finally add in some shadows at the tops of his tentacles and some random dots on his head for a bit of texture.

I went with a very simple blue and red color combo for this guy. As mentioned earlier, if you’re using colored pencils, you can achieve the subtle shadows with a light shading of purple pencil.

Let’s now move on to the next section where we learn how to draw a jellyfish with a bit of a… boxy look about him.