After having determined the interference pattern associated with two slits, it makes one wonder what would happen if many more (equally-spaced) slits are added. We can recycle our geometrical analysis from the double slit problem to answer this question. Let's look at the example of four slits.

We begin once again with the assumption that the distance to the screen is significantly larger than the separation of adjacent slits: (dll L)). Starting with the lowest slit of the four as a 'reference' and repeating the double-slit geometry for each slit going up from there, we have a diagram that looks like this: This diagram is blown-up for clarity, but doing so makes the angles quite different from each other. With the proper scale in place the approximations of equal angles (and equal ∆x’s throughout) would be more apparent.

Okay, so as our first task, we will look for the position where the first bright fringe is located. For this to occur, we need all four waves to be in phase, which means that (Delta x) has to be a full wavelength, giving us the same formula for bright fringes that we found for the double slit:

[It should be noted that the positions of the fringes on the screen are measured from the horizontal line passing through the center of the collection of slits, as we did with the double slit.]

Does this mean that the result for several slits is identical to that of the double slit? Certainly not! First of all, there are many more sources of light, all interfering constructively, which means that the bright fringes are much brighter. How much brighter? Well, with four slits, as in the example here, the amplitude of a single slit is multiplied by 4, making the intensity (which goes as the square of the amplitude) 16 times greater than a single slit. For the double slit, the intensity was increased by a fact of 4 (the amplitude was doubled). Therefore doubling the number of slits increased the intensity of the bright fringes by a factor of 4. But wait, doubling the number of slits only lets in twice as much energy per second, so how is the intensity increasing so much?

The answer to this puzzle involves how concentrated the bright fringes are. All bright fringes have a point of maximum brightness that tapers down to the dark fringes. If the rate at which the brightness tapers down is greater, then the brightness (energy density) near those maximum points can go up, and the energy density near the dark fringes goes down, such that the same total energy hits the screen. But it turns out there is even a little more to it than this, as we will now see. 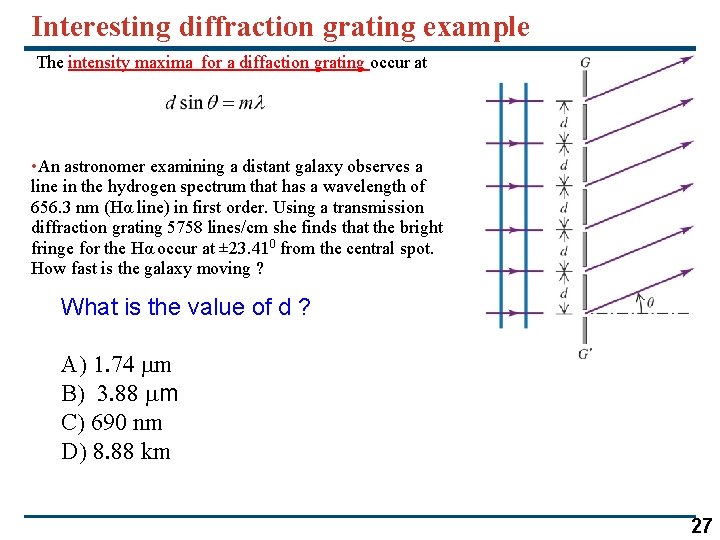 To demonstrate this phenomenon, it becomes necessary to redraw the figure above a little closer to the actual scale. We of course cannot possibly get very close to the actual scale, as slit separations are typically fractions of millimeters, while distances to screens are usually tens or hundreds of centimeters, but we will use what space we can manage. As before, we will use the red line as the reference, and compare the distances traveled by the other three light waves.

We'll start with the bright fringe, and start working our way closer to the central bright fringe until we hit a dark fringe. Strangely, we find that this position of total destructive interference does not occur at the halfway point, as it did for the double slit! Note that when the distance (Delta x=dsintheta) equals three-quarters of a wavelength, then the wave that follows the blue path will travel 1.5 wavelengths farther than the wave that follows the the orange path, and as this is an odd number of half wavelengths, these waves will cancel. The same is true for the waves that follow the brown and red paths, which means that position will be completely dark.

So what happens if we keep going up the screen? We don't find any more maximally-bright fringes (all four waves can't be in phase), but we do find another totally dark position. It occurs when the distance (Delta x=dsintheta) equals one-half of a wavelength. In this case, The wave that follows the blue path travels one half-wavelength farther than the wave that follows the brown path, and the waves that follow the orange and red paths also differ in the distance they travel by one half wavelength. So the blue path and red path waves cancel, as do the brown path and yellow path waves, resulting in total darkness.

There is one other time when a dark fringe occurs. This happens when the distance (Delta x=dsintheta) equals one-quarter of a wavelength. Once again, alternate slits interfere with each other, as the waves travel distances that differ by a half-wavelength. We can also show this phenomenon mathematically, by superposing (adding) the wave functions. The waves start in phase at the slits, so all of the phase constants are equal (and we choose them to be zero at (t=0)), so all that remains of the wave functions is the position dependence. Once again, only the differences in distances traveled with the reference slit (whose difference with itself is zero), so the superposition intensity looks like:

Putting these functions into a graphing calculator confirms what we found above, as well as what we suspect about (n) slits – that there are (n-1) dark fringes between each maximally-bright fringe.

Figure 3.3.3 - Comparison of Interference Patterns by Number of Slits

Notice that the bright fringes for any number of slits occur at the same places as for the double slit (provided they have the same slit separation), and that the number of dark fringes between bright fringes goes up by one every time another slit is added. Also notice that the maximum intensity of the double slit is 4 units, the 3-slit case has a maximum intensity of 9 units, and for 4-slits it is 16 units, as we expect when the amplitude increases by one unit with the addition of each slit. But also notice that the widths of the bright fringes get narrower, indicating that the energy becomes more concentrated near the brightness maxima, and less concentrated near the dark fringes.

It turns out that we can mathematically check that the energy is in fact conserved by this mechanism. Recall that the intensity is related to power density, which means that if we integrate one of these curves over a full interval of space that the light is landing (say, between adjacent bright maxima), we get a measure of the energy landing in that region per unit time. Once again the graphing calculator comes in handy (unless integrating the intensity functions above is your idea of fun) as areas under these curves between maxima come out to be in relative proportions of 2:3:4 – the total energy landing on the screen every second really is proportional to the number of slits allowing light through!

By definition, a diffraction grating is composed of a planar substrate containing a parallel series of linear grooves or rulings, which can be transparent, semi-transparent, or opaque. When the spacing between lines on a diffraction grating is similar in size to the wavelength of light, an incident collimated and coherent light beam will be strongly diffracted upon encountering the grating. This interactive tutorial examines the effects of wavelength on the diffraction patterns produced by a virtual periodic line grating of fixed line spacing.

What Is A Diffraction Grating

The tutorial initializes with a beam of coherent and collimated purple monochromatic light (400 nanometers) incident on a periodic diffraction grating. Upon passing through the line grating, the light beam is diffracted into a bright central band (zeroth-order) on the detector screen, flanked by several higher-order (1st, 2nd, and 3rd) diffraction bands or maxima. In order to operate the tutorial, use the Wavelength slider to adjust the size of monochromatic light passing through the grating in a range between 400 and 700 nanometers. As the slider is translated to the right, the wavelength of incident light increases, producing a corresponding change to the diffraction pattern observed on the detector screen (the long, horizontal line above the slider). The diffraction bands formed by the higher-order maxima identify the diffraction angles in which wavefronts having the same phase become reinforced as bright areas due to constructive interference. In regions between the diffraction bands, the wavefronts are out of phase and cancel the intensity of each other by destructive interference.

The zeroth-order central maximum band is formed from light waves that do not become diffracted when passing through the diffraction grating, and displays an intensity value only slightly reduced from that of the incident beam. The diffraction angle, which is identified by the symbol q, is the determined by the angle subtended by the zeroth and first-order bands on the detector with respect to the grating. A right triangle containing the diffraction angle at the detector screen is congruent with another triangle at the grating defined by the wavelength of illumination (l) and the spacing between rulings (d) on the grating according to the equation:

As a result, the reinforcement of diffraction bands or spots occurs at locations having an integral number of wavelengths (l, 2l, 3l, etc.) because the diffracted wavefronts arrive at these locations in phase and are able to reinforce each other through constructive interference. If the sine of the diffraction angle is calculated from the distance between diffraction bands on the detector screen and between the screen and the line grating, the spacing (d) between individual rulings on the grating can be determined using the grating equation in the form:

The effect of wavelength can be demonstrated by illuminating the line grating with white light (containing a mixture of all colors). Under these conditions, the zeroth-order diffraction band appears white, but higher order bands display an elongated spectrum of colors with blue being closest to the zeroth-order band. Thus, blue light is diffracted to a lesser extent than is green or red light, as illustrated in the tutorial. 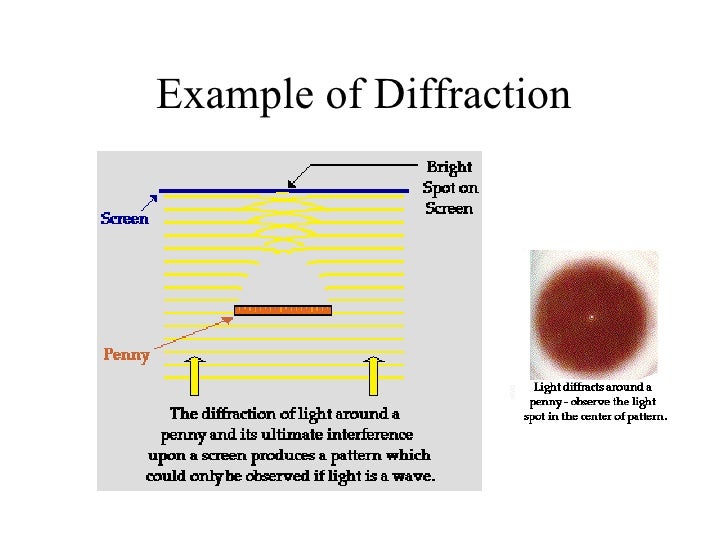 Questions or comments? Send us an email.

© 1998-2021 by Michael W. Davidson and The Florida State University. All Rights Reserved. No images, graphics, scripts, or applets may be reproduced or used in any manner without permission from the copyright holders. Use of this website means you agree to all of the Legal Terms and Conditions set forth by the owners.

This website is maintained by our
Graphics & Web Programming Team
in collaboration with Optical Microscopy at the
National High Magnetic Field Laboratory.

For more information on microscope manufacturers,
use the buttons below to navigate to their websites: