Diffraction of light through a rectangular aperture is a rather straightforward extension of 1-dimensional diffraction from a slit, as shown in the diagrams below.

A circular aperture is qualitatively similar, but an accurate quantitative treatment of the pattern requires more complicated mathematics. The intensity pattern is called the 'Airy Disk'. The main features are shown in the diagram below. The first minimum occurs at an angle θ = 1.22 λ/D, where D is the diameter of the aperture. On a screen a distance L >> D from the aperture the minimum is seen at a radial distance r' = 1.22 λL/D from the center of the pattern

Producing a laser beam is an attempt to confine the light in the directions transverse to the direction of propagation. The light will spread out in the same way it does after passing through an aperture.

Assume that at z = 0 the diameter of a laser beam is restricted to a(0). The angle through which the light spreads is approximately θ ≈ λ/a(0). (For back-of-the-envelope calculations we often ignore the factor of 1.22.) Because the laser beam diameter is typically much larger the wavelength of light, or a(0) >> λ, θ is quite small. At a large distance z the diameter of the beam will have increased to a(z) ≈ z*2θ. Consider a HeNe laser, for which λ = 633 nm with a beam waist of ~ 0.6 mm. Then θ ~ 10-3 rad = 1 millirad. The beam must propagate ~ 3 m before the diameter increases by a factor of 10.

In geometrical optics we assume that an ideal, aberration-free lens focuses parallel rays to a single point one focal length away from the lens. But the lens itself acts like an aperture with diameter D for the incident light. The light passing through the lens therefore spread out. This yields a blurred spot at the focal point. Light near the focal point exhibits an Airy Disc pattern. The size of the Airy Disc is determined by the focal length f and diameter D of the lens. The radius r of the Airy Disc at the focal point of a lens is given by r = 1.22 λf/D.
If all ray aberrations in an optical system can be eliminated, such that all of the rays leaving a given object point land inside of the Airy Disc associated with the corresponding image point, then we have a diffraction-limited optical system. This is the absolute best we can do for an optical system that has lenses with finite diameters.

The width of the central maximum in a diffraction pattern depends on the size of the aperture, (i.e. the size of the slit). The aperture of your eye is your pupil. A telescope has a much larger aperture, and therefore has a greater resolving power. The minimum angular separation of two objects which can just be resolved is given by θmin = 1.22 λ/D, where D is the diameter of the aperture. The factor of 1.22 applies to circular apertures like the pupil of your eye or the apertures in telescopes and cameras.

When light passes through an aperture with diameter D, then diffraction limits the resolution to θ = 1.22λ/D. If the angular separation of two sources is less than θ, they cannot be resolved. The closer you are to two objects, the greater is the angular separation between them. Up close, two objects are easily resolved. As your distance from the objects increases, their images become less well resolved and eventually merge into one image.

A spy satellite travels at a distance of 50 km above Earth's surface. How large must the lens be so that it can resolve objects with a size of 2 mm and thus read a newspaper? Assume the light has a wavelength of 400 nm. 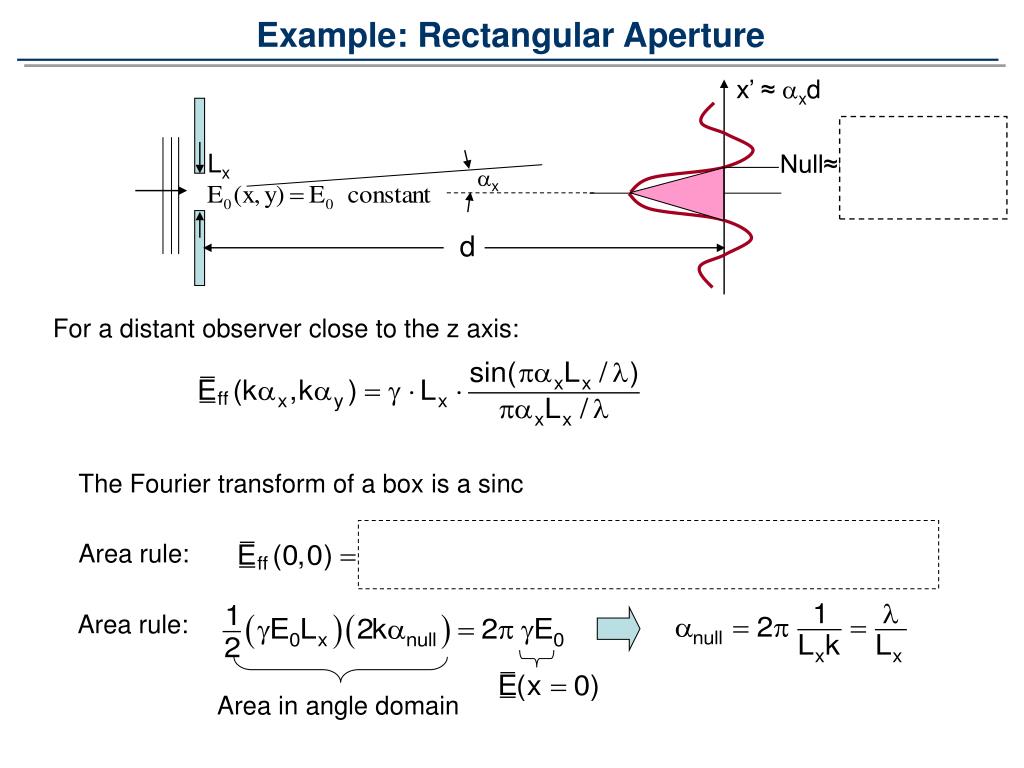 The limit to the eye's acuity is actually related to diffraction by the pupil.
Estimate the angle between two just-resolvable points of light for the pupil in bright daylight. Make reasonable assumptions.
Given this angle, estimate the greatest possible distance you can resolve the two headlights of a car?

Discuss your estimates with your fellow students in the discussion forum!

DiffractionMTF is a wave-optics calculation for which the only variables (for a given aperture shape) are the aperture diameter D, wavelength λ, and focal length f. The MTFdiffraction is the upper limit to the system’s performance; the effects of optical aberrations are assumed to be negligible. Aberrations increase the spot size and thus contribute to a poorer MTF. The diffractionMTF is based on the overall limiting aperture of the system (the aperture stop). The diffraction effects are only calculated once per system and do not accumulate multiplicatively on an element-by-element basis. 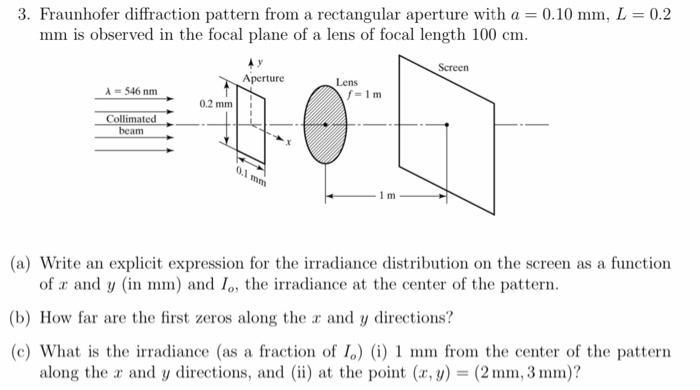 Because of the absolute-value-squared operation, the two transform operations of Eq. (1.24) do not exactly undo each other—the diffraction OTF is the two-dimensional autocorrelation of diffracting aperture p(x,y). The diffractionMTF is thus the magnitude of the (complex) diffraction OTF. As an example of this calculation, we take the simple case of a square aperture, seen in Fig. 1.24:

The autocorrelation of the square is a triangle-shaped function,

with cutoff frequency defined by

Figure 1.24 Terms for calculating the MTF of a square aperture.

For the case of a circular aperture of diameter D, the system has the same cutoff frequency, ξcutoff = 1/(l F/#), but the MTF has a different functional form:

As an example of the calculations, let us consider the square-aperture system of Fig. 1.26(a) with an object at finite distance. Using the object-space or image-space F/# as appropriate, we can calculate ξcutoff in either the object plane or image plane:

Because p < q, the image is magnified with respect to the object; hence a given feature in the object appears at a lower spatial frequency in the image, so the two frequencies in Eqs. (1.30) and (1.31) represent the same feature. The filtering caused by diffraction from the finite aperture is the same, whether considered in object space or image space. With the cutoff frequency in hand, we can answer questions such as for what image spatial frequency is the MTF 30%? We use Eq. (1.26) to find that 30% MTF is at 70% of the image-plane cutoff frequency, or 223 cy/mm. This calculation is for diffraction-limited performance. Aberrations will narrow the bandwidth of the system, so that the frequency at which the MTF is 30% will be lower than 223 cy/mm.

The next example shows the calculation for an object-at-infinity condition, with MTF obtained in object space as well as image space. We obtain the cutoff frequency in the image plane using Eq. (1.27):

As in Fig. 1.26(a), a given feature in Fig. 1.26(b) experiences the same amount of filtering, whether expressed in the image plane or in object space. In the object space, we find the cutoff frequency is

Let us verify that this angular spatial frequency corresponds to the same feature as that in Eq. (1.32). Referring to Fig. 1.27, we use the relationship between object-space angle θ and image-plane distance X,

Given that θ is in radians, if X and f have the same units, we can verify the correspondence between the frequencies in Eqs. (1.32) and (1.33):

It is also of interest to verify that the diffractionMTF curves in Fig. 1.25 are consistent with the results of the simple 84% encircled-power diffraction spot-size formula of 2.4 λ (F/#). In Fig. 1.28, we create a one-dimensional spatial frequency with adjacent lines and spaces. We approximate the diffraction spot as having 84% of its flux contained inside a circle of diameter 2.44 λ (F/#), and 16% in a circle of twice the diameter.

Figure 1.28 Verification of the formula for diffractionMTF.

The fundamental spatial frequency of the above pattern is

and the modulation depth at this frequency is

in close agreement with Fig. 1.25 for a diffraction-limited circular aperture, at a frequency of ξ = 0.21 ξcutoff .