On Windows, configuring CLion requires setting up the environment: Cygwin, MinGW, WSL, or Microsoft Visual C++. You can have several environments installed on your system and create separate CLion toolchains for each of them. As a determining part of a toolchain, the environment provides C and C++ compilers, the make utility, and the debugger (in case of using default tools).

Linux has made it easier to use OpenGL than Windows. Cmakeminimumrequired(VERSION 3.10) # common to every CLion project project(OpenGLLinuxTest) # project name set(OpenGlLinkers -lglut -lGLU -lGL) # setting all the Glut libraries as one variable. CLion is also available as a snap package. If you’re on Ubuntu 16.04 or later, you can install CLion from the command line. Sudo snap install clion -classic.

Although MinGW-w64 provides both 64- and 32-bit options, you can also install MinGW, the 32-bit-only version.

You can use WSL, Windows Subsystem for Linux, as your working environment in CLion on Windows 10 (starting the Fall Creators Update version 1709, build 16299.15).

WSL toolchain enables you to build projects using CMake and compilers from Linux and run/debug on WSL without leaving CLion running on your Windows machine.

Refer to our WSL guide for details on setting up WSL on your system and configuring WSL toolchains in CLion.

Note that msbuild is not supported: CLion runs CMake with the NMAKE generator instead.

For the case when your code includes MSVC extensions, CLion provides the support for:

As an alternative compiler, you can use clang-cl- the MSVC-compatible compiler driver for Clang. CLion supports clang-cl version 8.0 and later.

Note that currently the -T clangcl options can't be picked up if the bundled CMake is in use along with the Visual Studio toolchain setup (CPP-18848 ).

The MSVC toolchain debugger is implemented on top of LLDB. It can work with native visualizers from the Visual Studio installation or from your project. To enable native visualizers support and set the desired diagnostics level, select Enable NatVis renderers for LLDB in Settings Build, Execution, Deployment Debugger Data Views C/C++:

Also, if you have custom native visualizers in your project, CLion will use them as well:

With CMake 3.15, it has become possible to use the Clang compiler on Windows with the MinGW-w64/MinGW toolchain.

However, the LLVM Clang for Windows is built using Microsoft Visual Studio, and all the built-in macros and include search paths are set up for use with Visual Studio. So if you take Clang from the LLVM repository, it will not work correctly when configured with the MinGW toolchain. One of the possible workarounds is described below.

Set up the Clang compiler for MinGW

With this new toolchain configured, you can build the project and start using the Clang's advances tools, such as profile-guided optimization. Take a look at our detailed blogpost for instructions.

In the case of MinGW, CLion includes the bundled GDB (version 10.1). For Cygwin, you need to install the GDB package in the Cygwin Package Manager, as described in the Cygwin section of this guide.

You can also switch to a custom GDB binary. In this case, the supported GDB versions are 7.8.x-10.1.

Note that for GDB 8.0 and later, debugger output is redirected to CLion console by default. To enable opening an external console window for application input/output, go to Help Find Action or press Ctrl+Shift+A, search for Registry, and set the following key: cidr.debugger.gdb.workaround.windows.forceExternalConsole.

CMakeLists.txt file contains a set of directives and instructions describing the project's source files and targets (executable, library, or both). 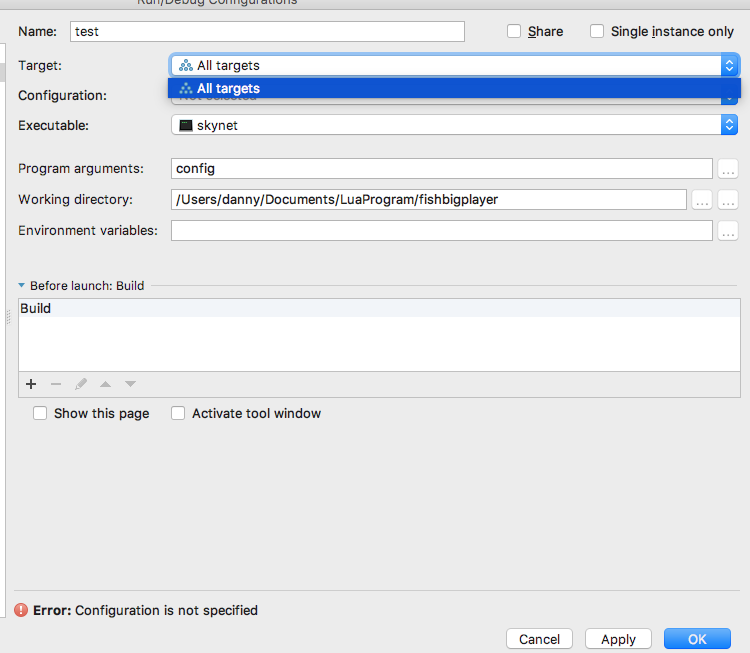 When you create a new project, CLion generates CMakeLists.txt file automatically and places it in the project root directory. To open a project, you can point CLion to the top-level CMakeLists.txt and choose Open as Project.

Example below shows the CMakeLists.txt file of a simple 'Hello, World!' project:

You can edit CMakeLists.txt files right in the Editor. Make sure to reload the project after editing. Automatic reload feature is disabled by default, you can turn it on by selecting the Automatically reload CMake project on editing checkbox in Settings / Preferences Build, Execution, Deployment CMake.